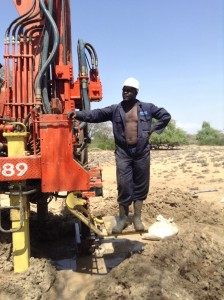 He is the maestro. He directs everything that is happening around the rig. He is a big man. He is in charge. You just have to love this guy.

Barnabas is in charge of drilling for Hope Water that is the division of CRF that drills for water in the drought in the Horn of Africa. When I met Barnabas, he said—“I am a driller. That’s who I am. That’s what I do.”

Barnabas and his crew live in the desert in Turkana. They work in an area where it has not rained in six years. It’s a tough place. They sleep on the ground. The heat is unbearable. They shoot animals with bows and arrows for food. Why would they live under such circumstances? All for water.

“Water is life!” Barnabas said. Thousands and thousands are dying all around this place. And if Barnabas finds water—they live. I asked him why he left being a driller for the biggest company in Kenya to go to the desert. He told me it is because we are Christians. Bringing living water was just as important to him as bringing the water that comes out of the ground.

It took us about 9 months to get a rig to Turkana. We had to jump through so many hoops with the Kenyan government to get it in that our patience was tremendously tried. But it was worth it when water flowed for the first time.

I got to be there and see with my own eyes the water from the first borehole. Barnabas made it a production. He stood on a high platform on the rig by himself. He had all kinds of knobs and levers to pull to get things in order. He called all the cameras around him. He took a dramatic pose. And with one more pull of a lever, water was streaming up from the ground. As the water was drenching over his head, Barnabas dramatically jumped from the platform to the ground. He gave us a thumbs-up and a smile. Then he gave me a giant hose where I could shoot the water from the ground into the air. Pretty soon he was gathered with a group of the natives singing and dancing as they celebrated the life coming from the ground.

“He turned the desert into pools of water and the parched ground into flowing springs.” Psalms 107:35

2 Responses to Barnabas–Maestro of Water