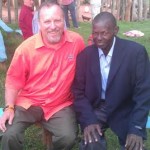 My dear friend Emmanuel died. Here is what I shared at his funeral. I know many of you have prayed for him and support Emmanuel’s Kids (thousands of Aids, famine and war orphans in Kenya).  I was asked recently to tell more about him so maybe this will help you know him better.

I want to thank you for letting me share in this memorial time. I am grateful for my great friend and brother, Francis Bii, for telling my thoughts and speaking for me. I know he will communicate well and represent my thoughts as well as that of CRF.

My love and comfort is extended to all of you here. I wanted to send you my condolences.  Christian Relief Fund, CRF, and I send our greatest sympathies to Alice and all of the family, the children of Eruli and Milton Simotweet, to all the church members, and to the friends who gather in this time of reflection and memory. We are so thankful for the way Emmanuel was an exemplary leader for CRF in helping to serve the lost and the least.

Emmanuel was a great husband, father, educator, pastor, and so much more.

He was named appropriately. He was even born on Christmas Day.  When Emmanuel was in our presence, we were reminded that God was with us.

I’ve never met a better man than Emmanuel. He was my friend. One day he told me that we were just alike. I have never had a better compliment. I love him. I will miss him immensely.

My friend Jared Odhiambo told me that we are supposed to look at this world through the lens of James 1:27 where God tells us that true religion is about helping orphans and widows. Emmanuel did this better than anyone I know. Anytime we had to make a decision together, he would remind me– “It’s all about the children.”

He saw the world differently. There was a gleam in his eyes that was absolutely unique. It seemed that he was seeing things that other people were missing. His look was otherworldly. It was as if he were seeing into a realm of God that the rest of us hadn’t seen yet. And now he sees the Master face to face. What before was a preview for Emmanuel is now the ultimate reality. Emmanuel is with Emmanuel. He is saved.

Let me tell you how I met Emmanuel.

I was sitting in a CRF clinic that had just opened at the Ring Road Orphan’s Day School in Kisumu, Kenya. We had been working for about four years trying to build this little clinic that would help mainly with AIDS victims but also treat malaria, tuberculosis, bilharzia, cholera, and other diseases. I was told that a man had made a very long journey to meet with me because he heard that I helped children.

I invited him in to talk to several of us about his plight. He told us that he was a former schoolteacher and had started a little school that he called Eruli School. He was from a place near Bungoma. He told the story of how he was personally trying to take care of 126 children who were AIDS orphans. He had a small pension from teaching school and a little farm. But with the famine, his crops were just not enough to feed the children. As a result, the children were starving. He did not know what to do with them. So he continued teaching them about Jesus and praying. When he heard that I was in Africa, he took the journey to talk to me. It was hard to believe the incredible story of “Emmanuel’s Kids.” So I checked with Jared Odhiambo who had been there to confirm if his tale was true. It checked out. It was true.

With much remorse, I told him that Christian Relief Fund was not expanding and starting new works. Because of the great recession in the United States, we had lost sponsorships and money. As a result, we were trying to get new sponsorships for old works and children rather than for new kids. So basically, I told him “no”.

Then he thanked me. Even though I didn’t help him, he thanked me. And he asked if he could pray for us. He said that it must really be hard for us in the United States. So he prayed fervently that the Lord would bless us and help us through all the hard times we were going through in the U.S. Our bad times were nothing in comparison to his—but it didn’t matter to Emmanuel. He was gracious—and thankful.

Then we offered to buy him a bus ticket home. He said that he didn’t want to take money from us if we were in a recession. I insisted.

Then I remembered his name—Emmanuel–that means “God with us.” I was looking into the eyes of Jesus. It was totally what Jesus talked about in Matthew 25—as you do to the least of these, you do to me.

That’s when I realized that when you help Emmanuel Namunyu, you are helping Jesus.

I have never seen anyone on this earth more like Jesus. I have never met anyone who cares for children more than Emmanuel. When I last preached at Eruli, I said that Emmanuel is the hero of Africa. And he is my hero too.

CRF has changed. We help “Emmanuel’s Kids.” His ministry has expanded to touch thousands of orphans at Eruli, the new high school, and Milton Simotweet by Mt. Elgon. His work may have been slow in starting but now it is among the biggest of the Christian Relief Fund works around the world.

Emmanuel discovered God’s will. He was thankful no matter what was happening around him in life. I think that is the greatest lesson that he wants us to learn. And I am extremely thankful for Emmanuel.