On this fifth day in Africa we did not drive many total miles, but the ones we drove were on absolutely the worst roads I’ve ever traversed. The mountain roads in this region are dirt, washed out and rutted deeply, with potholes the size of Texas, alternated with 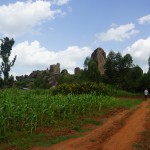 iceberg-sized boulders that stand at just the perfect height to rip out the oil pan of any naïve vehicle that’s stupid enough to venture onto the road. Here near the equator the climate is temperate, the growing season long, the rainy season regular and faithful. These rural roads thread through what certainly has to be some of the most gorgeous land in the world, much of it planted in terraced rows of corn and cabbage and collard greens about as far as the eye can see in any direction. The verdant vistas across these roads are beautiful; but the prayer and confession required to travel these roads severely limits the scenic enjoyment. Stated another way, the roads are too frightening to allow for much scenic enjoyment–or much enjoyment of any kind– unless you favor off-roading as a hobby.

These roads are heavily traveled by pedestrians, bicycles and motorcycles. This is partly true because many of them are in such a condition as to not be suitable for travel in any vehicle that is not mostly tank, or of a two-wheeled variety.  I would be willing to bet that few people have ever gone where we went today in a Toyota minivan!  Even the locals were amazed! What Stephen our driver did today is right up there with Jesus walking on water; tales of his great automotive prowess (Stephen’s, not Jesus’) will echo through generations in the Mt. Elgon region of Kenya; near the end of our journey we presented Stephen with a trophy and proclaimed him “The Best Driver in the World.”  He simply took us places you cannot drive in a minivan, and we lived to tell about it. No tow truck was required, and no tires were changed. It was miraculous!  You may be wondering why we attempted such a feat; as difficult as they are to traverse, these roadways are the only ones that go to the places we went today, so they are important. It would seem clear that the government has no actual awareness of them, as they are carefully maintained every 9 or 10 years.  We managed to visit three schools today, only falling 5 hours behind in our schedule; I’ll write about those visits in another post. But while I’m still vibrating from the day’s journey, the sheer terror and excitement provided by driving thus far in Africa has caused me to come up with some rules for driving that may prove useful if you ever find yourself behind the wheel on the Dark Continent. (These rules are meant to be somewhat tongue-in-cheek, and in no way to ridicule Kenya or those brave enough to drive in it; they are, however, much closer to the truth than you might imagine!) I fully expect to see these in KEN-DOT publications the next time I go to Africa.

Some Rules for the Road while touring Africa:

If you’re reading this and think I’m exaggerating, you haven’t driven in Kenya yet!  I left my good friend Francis Bii with a few heartfelt and urgent words: “Whatever you do my friend, buckle up and turn off the cell phone. At least one of them!