Serving Him in Japan

I thought I would have Marlin Ray share his experiences in Japan this week as a guest blogger. Marlin is partnering with CRF to help in the Japanese disaster. He and his wife, Jean, have served there as a missionaries for decades and are long term friends of Barbie. -Milt

Hi,
We are back in Tomobe!  We had a “good” trip to the earthquake and tsunami area.  I had my van loaded with food, water and clothes.  It was slow going at first as many people had been helped and electricity and water had been turned on in many areas.  As we reached Onahama area, we could see more damage.  The rivers were covered with wood, plastic boxes, and all kinds of debris, all along the banks.  We then went to the ocean front and it was terrible. Trucks were lifted up onto walls, cars inside of houses that were precariously standing, houses were pushed off their foundations and onto roads or into other houses.  Most of the ones that took the force of the tsunami were splinters, literally.  Sometimes the roofs were sitting on the ground with splinters here and there of the house.  Huge gas and oil tanks were smashed and oil smell was strong.

The time we were there, it was clear and nice.  The sky was blue, and the sea was clear and blue.  It looked like a paradise toward the sea, but if you looked behind you, there was destruction.  People were looking through their houses or where their house used to be for personal belongings or for their friends and relatives.  So many people died and so many are still missing.  We went to several

shelters and passed out food, water and clothes. Some shelters had electricity, but few had water.  In most of the shelters, the young and strong were out cleaning up.  The old and very young were still there.  We heard many stories of their experiences.  We passed out crayons and paper to the young.  They eagerly took and began to use them.  It seemed to make them happy.

We spent the night at our friend Miyo’s house, Yumiko Hara’s cousin.  Yumiko went with us to explain about the area and help us find the shelters.  The tsunami came within 3 houses of her house.  Further down the street from her house were many houses badly damaged.  Miyo is a Christian and a very hard worker, taking things everyday to those who

need them.  She also acted as our guide.  We were told that workers were the most needed.  Hands to shovel the debris, clean out the mud, take broken things out to the dumping area and give encouragement.  The people there are feeling very down as many of them lost not only their houses and jobs, but family and friends.  We plan to take another trip

next week to take some more things.

Serving Him in Japan,
Marlin and Jean Ray 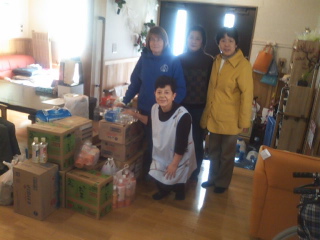 One Response to Serving Him in Japan