The Big Test (or Taste) 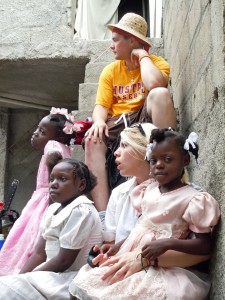 These little girls were waiting for a chance to taste the clean water.

The cup was shaped just like a communion cup. But it was a little bigger. A prayer of blessing was invoked before we shared it. We stood in a circle as we passed it around. It was a holy moment for us, but it wasn’t the Lord’s Supper. Nearly everyone had a taste from the cup. One person was left out or saved to last as we drank. He was a different. Certainly, he was a different race and color. He was from a different economic background. But that is not what made him different in this circle. The difference was that he was a man from Haiti. He should not have to go first in this taste test.

No, we weren’t drinking the proverbial Kool-Aid. But it was pretty dangerous still. We had just spent the last few days installing a water purification system for an area of Haiti that is going through one of the worst cholera epidemics in a long time. We had just finished purifying our first 300 gallons of water. But was it really pure? Could you still get cholera like you could in other water here? How would you know? There’s only one way to know. You have to taste it.

But whom would you pick to taste it? Certainly, you could just say that we did a good deed and leave them with the new water. It had to be as good as the old water. Let the people of Haiti drink it and go on as things were before. They had already been exposed to bad water, so why not let them continue to be?

So we drank. We passed the cup and tasted the water. That’s what our mission group did. There was no arm-twisting. There were plenty of volunteers. We finally let our Haitian friend have a drink, but it was only after we had already decided that the water was good. But do we know absolutely for sure that the water was good? I tested it. I have faith. I will drink it again. Yes, I believe the water is good. I believe that thousands of lives will be saved because they drink this water rather than the water that they have been drinking.

It reminds me of the Lord. I can’t prove absolutely to you that He is good. But I believe it. And I have tasted. And I trust Him. And His way and water will be better than any you have tasted before. But you will have to trust that it is. You will have to taste it to find out.

Psalm 34:8 Oh, taste and see that the LORD is good; Blessed is the man who trusts in Him!

Yes, we are still alive. Yes, the water is good. And so is God.

Milton Jones is the President of Christian Relief Fund in Amarillo, Texas. In his work there, he has focused on the care of AIDS orphans in Sub-Sahara Africa. He has also served as a preacher and campus minister in both Texas and Washington. Milton has authored eight books including a touching tale of one of his heroes with Cerebral Palsy, Sundays With Scottie. He is married to Barbie Jones and has two sons, Patrick and Jeremy.
View all posts by Milt →
This entry was posted in Haiti2011 and tagged Haiti2011. Bookmark the permalink.

3 Responses to The Big Test (or Taste)