The Miracle in the Desert 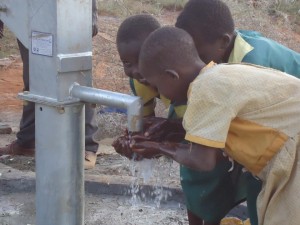 The first day of my new job was one of the most sobering of my life. My first task as president of CRF was to get some children supported who had been waiting for a sponsor. On the top of the list was a little girl named Maurine. She was from a obscure place called Barwessa.  When I investigated her needs, I found out that she had died waiting for a sponsor. She had starved to death because of the lack of food and water where she had lived.

Maurine’s memory haunts and inspires me. I learned quickly the reality of poverty and famine. The consequences of waiting and not reacting immediately were demonstrated to be dire to me. And even though Maurine wasn’t around anymore—Barwessa was.

Stories of Barwessa were too often tragic. I heard one time that all they had left to eat were rats. Another time the story was about two tribes fighting for the little food left. The animals were leaving because of the lack of food. The crops were dying.  And it hadn’t rained in years. And ultimately that was the big deal—no water. People were walking around 15 miles to fill a can of water. And it was bad water. They were only bringing back diseases.  So they died if they didn’t drink it, and they died if they did drink it.

I went over there last summer and met with leaders to see how we could get water for them. No one had any solutions. They had tried before. Other relief agencies had given up and left. I left with no plan. But it couldn’t leave my mind or my heart. This is where Maurine had died.

If you read my blogs, you know that the situation in the Horn of Africa has even worsened with one of the most horrible famines in history. So Barwessa got even worse. And we decided to drill. We were going to have to go deep to even have a chance at water. It was going to have to be through rock. It was going to be very costly. Other groups weren’t willing to take the risk or spend the big bucks. We had to do it. Why? These were our children there. When it comes to “your” children, you have to go the extra mile no matter what it costs, don’t you?

And we hit water. Africans call it “the miracle in the desert”. They compare it to Moses getting water from the rock. Even the skeptical driller believed in God after the water flowed.

Orange is the color of hope. Hope is what this blog is about. I have found this year that it is easy to lose hope. There are simply so many big problems in this world. But the miracle in the desert reminds me to keep hoping.

We are dedicating the wells of Barwessa this week. We ended up drilling five of them and hit water on four. I wish I could be there for the dedication. As a “thank you”, they bought me a goat. I wish I could accept it personally. They probably can’t mail it to me.  But if they could, I would name that goat, “Hope.”