Medicine, Moses, and the President 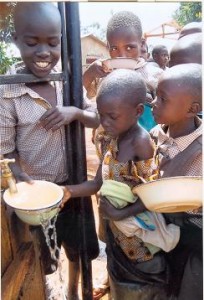 Today was a day of nicknames. We left Eldoret for what I might call the jungle. They called it undeveloped rural villages. We took off early for an eight-hour journey on some of the worst roads imaginable. Our destination was to be an area called Barwessa. This region has been devastated and ravished by the famine in the Horn of Africa.

And by the way on this little trip, I got to meet with three different chiefs. How cool is that? All of them were petty grateful that CRF had brought water to their village in the last few months—so there were no scary moments being called before the chiefs.

“Medicine.” At our first community, the village elder spoke after the chief. He had an interesting but puzzled look on his face. Actually, I couldn’t understand anything he was saying. But I could tell by the other people’s faces that he was the most important person in the community.  He was an old man. He was the teller of the stories and the dispenser of the wisdom. After the ceremony, all of the people there went to sit under some big shade trees and drink Coca-Colas and fried tortilla-like bread. It seemed like we should have drank the water, but I like Coke (and it is so much better in Africa).

Luka stated that he doesn’t know how someone like me could come here and find what was always here but nobody knew before where it was. He obviously was talking about water, but I think he was probably on a deeper philosophical plane too. He said that the water was always there, but no one could find it. And they had given up years ago. Then he said you came and told us where it was. And it was there. He thanked me for helping them find what they were looking for but couldn’t find. And he thanked me for saving them.

Then he bestowed on me my new name—“Medicine.” He said that you are Medicine from the sky. He said God sent me. He said that ever since I got them the well, there was no typhoid. In the past, all of them had typhoid and were dying. Now all of them had clean water and no diseases. To say the least, he was thankful. Obviously, he gave me more credit than I deserve. But I liked this man. I think I could have received compliments and hugs from him for a long time.

“Moses.” Well, we made it to our next site, and we were greeted by an abundance of people in bright African clothing singing. In fact, it was just like the last place. All kinds of children were gathered in the front and singing loudly. They were CRF sponsored kids. They were there to make a statement—a statement of thanks. Oh, I was also asked to pump some water from the new well just like at the last place.  I made some comment about not ever being there before, and Priscilla, the chosen spokesperson because of her beautifully spoken English, corrected me and said that they all knew me. Seeing my confused look, she said they had known me for a long time by my works. She said my works got there a long time before my body did. I think I like that analysis. I think it may be profound. I think I’m going to meditate on it a little longer before I comment much more.

And then Francis Bii, our CRF leader in the famine relief effort in Africa, took over to introduce me. Francis is like my son, so I knew it would be good. He introduced me as “Moses.” He spoke of the incredible drought in their desert and how they had been told it was impossible to get water there. Then he said, I was like “Moses” and had struck the rock, and there was a miracle in the desert. Water now flowed. I think Francis probably gave me a little too much credit for the event. But I think I could have listened to Francis all day or maybe even all my life. There is something kind of nice about being complimented. There is something kind of nice about being appreciated. I’ll take a comparison to any great Bible leader. You don’t have to comment. I know the differences. It was just kind of fun seeing people so thankful. You don’t get that enough.

“The President.” Next place. More singing. More children. More water. But this time—they had put a rope around it so I could cut the cord and make an initial start to this dedication and even pump the first bit of water. The chief got up and kept calling me the “President.” He never mentioned my name. I don’t think anyone ever did. It was just the President. Although someone said maybe we should use the term “angel” instead—so I was pretty glad they just kept with President. The chief yelled—“We love Presidents!” I wasn’t sure what he meant by this until I remembered that Obama was from Kenya, and he said that I lived in Obamaland (what a lot of Kenyans call the U.S.). Here is how he described Barwessa: No water. No food. No rain. As a result, the chief was pretty glad that CRF had developed a mango farm, built bee hives, started schools for orphans, brought in tons of food, and drilled a water well for the community about fifteen miles closer than the water that was giving them typhoid. He said he liked sitting close to the President. I don’t really know who he thinks I am, but I think his view is pretty elevated. But to be honest, I kind of liked sitting by the chief too.

The chief (I call him that instead of by his name too) said that he doesn’t understand why a president would come from such a long distance to such an insignificant place just to give a gift. To be honest, it really isn’t that much trouble for me–but it is a question that I think about on another plane with God coming here for such an absolutely insignificant person like me (no matter what the people said today) to bring me the best gift of all—the gift of life, His Son.

Truly, it was a day of seeing overwhelming need. But it was a day of seeing how you can really change some lives with a little bit of work and money—and a whole lot of God. And it was a day to start the nicknames. I will get some more this week when I see my friend Emmanuel. He gives everyone a nickname. He usually calls me, “Papa.” But I kind of like it when he calls my friend Jason Beagle—“Dog.” But he calls himself “Hyena” so how can you complain?

I forgot to tell you that I did get some gifts from the people too. The first place gave me a goat. I usually don’t re-gift things, but it wouldn’t fit in my suitcase. Then I also got a watermelon. And then last of all, I received an orange. Finally, someone really did know me.

5 Responses to Medicine, Moses, and the President