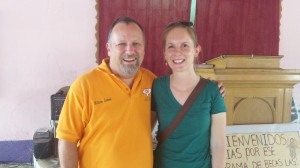 As I was riding up a chair lift to ski Mt. Baker in the beautiful Cascade Mountains, my good friend, Curtis Jones, told me that he had some news that he just had to share with someone. He told me that he and his wife Judy were expecting their first child. Progressing up the mountain, we shared the joy of the news and what dreams would come because of this child. Little did I know that I would be telling him the same news in just a few months. And little did I know that I would meet up with his daughter decades later in Honduras.

Curtis and I moved together from Lubbock, Texas to Seattle, Washington to start a campus ministry. He would tell people frequently that the two of us were identical twins since we were both named “Jones.” It was a great joke leaving people greatly puzzled since Curtis was about seven inches taller than me. Curtis died a few years ago but lives in so many of us who do ministry. There was just no one better than Curtis—although his daughter, Meredith, may be pretty close. I guess the moving for ministry just got in the genes of our two families. We moved about 2000 miles to help reach college students for God. But those first two children really outdid us. Patrick, my first, has moved to Jakarta, Indonesia to teach in a Christian school. And Meredith moved to Honduras to work with Mission Lazarus.

We left Tegucigalpa to go to Choluteca. It’s about a 3½-hour drive. The mountains were bigger than any I had seen before in Honduras. They were incredibly tall with windy roads and big valleys. It reminded me of going through the mountains of northern Haiti or maybe even New Mexico. And with a short ride outside of these spectacular mountains, you find yourself going up another hill that leads you past a little lake to some lodges that houses Mission Lazarus. And that is where we saw Meredith standing.

Meredith is a nurse at Mission Lazarus. She helps with the children who are there in the children’s home, the poor in the community and medical brigades in areas where health needs are huge. Mission Lazarus is a holistic ministry that does all kinds of efforts to help with immediate needs and promote sustainability. They help with businesses and agricultural efforts to empower the local people to help themselves. They even raise coffee and cattle. They plant churches. And as I have mentioned, they help with medical needs. How does this relate to CRF? We partner with Mission Lazarus to help children in this area.

In 1998 Hurricane Mitch devastated the area around Choluteca. CRF entered this region to bring relief. We built houses and started meeting the needs of hurting children. Years later we still are there partnering with Mission Lazarus to help meet the physical, educational and spiritual needs of the poorer children in this area. Currently, CRF is helping at 11 different sites in this area.

Yesterday, I got to go with Carlos and a team from Mission Lazarus to witness these areas of relief. Sammie is our CRF leader in this area working to help all of the CRF children. He is a great guy with a heart for children and Jesus. We went all over the mountains to visit four of our 11 works there. All of them had children waiting to greet us (and hug us). We witnessed several moving programs put on by the children. The last place we went was a place called Limon. Ishmael was the minister there who works with Sammie to take care of the children. Actually, some of our other CRF works from other areas joined us in Limon to give their appreciation too. So the last words from the last work I visited came from Ishmael. He couldn’t have been more appreciative. He said, “We didn’t know what to do, and out of nowhere—CRF showed up. It was a miracle.”

Well, I’m going to head back today. It will take a couple of days to get back since there aren’t a lot of flights to Amarillo. But I thank God for the journey. I thank God for my guide, friend, visionary, partner, driver, translator, and faithful brother—Carlos Carbajal. No one can take you through Honduras better than Carlos.

Meredith, your dad is proud of you. I know that I am. All the dreams came true.