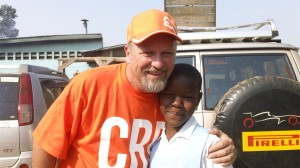 There’s nothing like 500 orphans singing “Happy Birthday” to you. Yes, the Ring Road Orphan’s Day School had a surprise birthday party for me. They called me to stand in the school ground by the flagpole supporting the Kenyan flag. Then their goal was to sing it so loudly that it could be heard in the next city. I think they succeeded.

When the singing was over, an unbelievably popular event happened. They had rented a huge sound system and started playing music. The children danced. I have never seen them so happy. The first song was about following the leader. So they formed a long train and danced all over the school ground. Then the music just kept playing and playing. Maurine Otieno grabbed my hands and said, “It is your birthday. You must be happy and dance.” I’m not really a dancing kind of guy, but how could you refuse this little girl? And if I’m not a dancing kind of guy, I’m really not knowledgeable in the Luo tribal form of dancing. But Maurine had a plan. She led me over to a huge crowd of children jumping up and down. Then she told me that Smurf was waiting to dance with me. Smurf is my sponsored child. Barbie fell in love with her at first sight when Smurf couldn’t quit crying around us. She had never seen a white person before. So for about a decade we have sponsored Smurf. I guess she is our daughter. And here she waited. All I could think of was a scene in a wedding back home where the dad gives the bride the first dance. Smurf’s parents had died when she was an infant. Perhaps I was the only father figure she had in her life. So we danced as hundreds of other kids surrounded us. It was my birthday, but maybe it was even more special for Smurf.

Then we had ice cream. A huge truck had entered the slum. And there was one of those big soft ice cream machines like you would see at Dairy Queen on it. They made ice cream cones for every one of the children. They had never eaten ice cream before. Can you imagine watching hundreds of little orphans eat ice cream for the first time? And if that wasn’t enough, the truck also had a big popcorn popper like at the movies. They even had the little sacks to put the popcorn in. And all the children got popcorn. And to cap off the celebration, the children were to be given brand new school uniforms. It was quite a celebration!

And to make matters more incredible. My good friends and CRF leaders, Francis Bii and Emmanuel Nmunyu, showed up. I figured Francis would be there. But Emmanuel was a surprise to nearly all of us. He doesn’t have a car, but got someone to drive him. We were going down one of the so-called roads in Nyalenda slum when a car stopped in front of us and would not let us around him. We were thinking how rude the people in the car were. And then Emmanuel jumped out and ran to us. I could only cry.

Children had drawn pictures for me and given me little cards. How could it have been more special? I thank my friends who came on this mission trip. I don’t know who else could have paid for this event. A group of children gathered around me and asked if my birthday could be an annual holiday so they could party like this every year. It’s okay with me.

And by the way, 53 of them were baptized too! I guess we share birthdays.