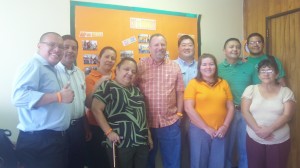 It was quite an adventurous day for us in Tegucigalpa. If you have never landed on a plane here—well, there’s just nothing else quite like it. Roller coasters take a distant second place to arrivals in this Honduran airport.

After finally finding my crew (how could we have missed—we were both wearing orange), we stopped at the Baxter Institute and then headed to eat.

But the key word these days in Honduras is fire. It is tragic what has happened. If you watch the news, you certainly heard about the fire in the prison that killed hundreds of prisoners. And then there was another fire in one of the huge marketplaces that has left thousands of people without jobs.  It doesn’t take long to figure out that there is a lot of violence going on here. In fact, we just lost our former meeting place for CRF because it was taken over by gangs. Sad story after sad story emerged because of the gang violence here.

But on the other side of things, something positive kept showing up on this day. As you obviously know if you read this blog that I work with children. The goal of Christian Relief Fund is to help orphans and poor children so they can get a break in a world that throws a lot of junk at them. But what I often forget is that these little kids grow up. And I kept running into them today.

First of all, there is Carlos Carbajal. He is hosting me around Honduras. He has helped direct our works here, so no one could get me a better education about the wonderful care for children here than him. Carlos has recently moved to Miami to preach at a church, which further shows his spiritual leadership. But what I nearly forgot is that Carlos is a CRF kid. In fact, he even called himself “J30”—his old CRF sponsorship number. He was proud to share his story of how he was helped. It is good to have a vision for your future. But it is also good to know where you came from. I love Carlos because he knows where he is going, but he also remembers his past. He is so grateful for his past that he wants to continually help other children to receive similar blessings.

But secondly, Carlos introduced me to Oscar and Wilma Ester. They were both CRF kids too. Oscar is now one of the leaders of the Baxter Institute. And Wilma Ester is now one of the directors of another CRF program in Honduras. I think of all the sponsors who sponsor children because they are needy and cute little kids. But they grow up. And because of what you did, they grow up well. And they are doing great things. And I’m glad they have remembered where they came from. And I’m glad they are so grateful.

And before the day was over, Carlos took me to the poorest place he could find to show me the most needy children over here. They were on a mountain. It took us hours to get there. One place had a mother with her nine children on a cluttered dirt floor house with very little food. And then I saw a room in an even worse house where most of the children had to pile together on a single worn out mattress that was so dirty. And Carla (Carlos’ wife) leaned over and said to me, “Look how happy they are.” And they were. But they still need some help. I wondered if someone would help one of them and if they could one day be just like Carlos. I thought about the extremes of the day seeing the best people on earth and seeing the destruction brought about by gang members. And what makes the difference in these two groups. Could it be who helped them and who didn’t when they were children? I so often see the beginning and middles of child sponsorship. I’m glad I got to see the end of it today.