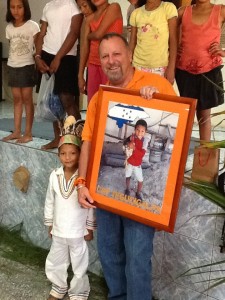 Spotless. I can’t think of anything better in the world at this moment. I probably should be thinking of a spiritual condition, but I’m not. I have been in some pretty dirty houses in Honduras, but that is not my gripe. No, I have red spots all over my body. Barbie thought I had the measles right before I came to Honduras. A few hours before I left for Central America, I had a doctor look at me to make sure I wasn’t going to infect a bunch of children with some strange disease that I picked up in Africa. He gave me permission to go, but these little bumps keep getting bigger and spreading all over me. And they have begun to hurt too. So when I went to our CRF work today in Tegucigalpa, I wasn’t nearly as thrilled as I would normally be that this work had the huggiest children on the planet. They hug you. Then they hug you. And then they hug you again. So I’m a pretty sore traveler at the moment. And I just want to be spotless.

Adela Mancado does an exceptional job of running the CRF program in Tegucigalpa. But its history is really a history of a bunch of children who have been loved and taken care of by the Mancado family. That may not seem like such a big deal until you realize that they take care of over 300 children.

Before I got to see all the children, a team of us delivered food to 25 houses. This was no easy task. Yes, these houses were at the bottom of a steep cliff. I thought everyone was giving me a hard time when they started down the rock face to get to these people who really didn’t have much at all (much less a good location). Repelling should have been a requirement to deliver these supplies.  I thought my heart was going to give out before my spots killed me. But wow, the recipients were grateful.  Adela wanted me to present the food from CRF. I don’t speak Spanish very well (you might say at all), but you don’t have to say much to communicate when you have food in your hand. They were all needy, but I will never forget the mother who was holding a two-week old baby. Her husband had already abandoned her. How was she going to make it? I don’t know. Food didn’t seem to be enough, but she seemed to give a pretty genuine smile and “gracias.” May the good Lord grace her.

After giving out food for so long in the hot weather, my hosts wanted to reward us with some authentic Honduran food (although some told me that it originated in El Salvador). We ate Pupusas. And they were pretty good, and I have to admit it. My pupusa was like a tortilla filled with pork and cheese. It was a stretch for my boring diet, but I did get to eat breakfast at Dunkin Donuts–and their Bavarian Crème donut is pretty good too.

Of course all the CRF children had a program for us. CRF is good at programs. And it was a good program. It was filled with traditional dance. Some women and girls even performed “La Punta” which is the special dance of Honduras. I was told how fortunate I was to witness it. And then it happened. I should have seen it coming. The women came and grabbed me and dragged me to the front to dance with them. This is the second time this has happened to me in the last few weeks. It happened with the women in Turkana, Africa and now in Honduras. Please don’t tell Barbie. I don’t want her to get upset that women all over the world want to dance with me. She will probably make me take dance lessons when I get home. At the end of the dance, I got to meet Sisi, who was selected from our kids to be the President of Honduras for a day. She is so smart and such a leader that she was the one chosen. And then I got to meet the CRF child of the year, Christopher. He had achieved the greatest merits of all of our children and won this award. I even got a framed picture of him.

Our evening was spent with a “thank you” dinner. CRF graduates came back to give their testimonies of the great help of CRF in their past and how they are doing now. It was kind of like a graduation. It was a rite of passage in a way. And it was all over a Chinese dinner (that’s what they wanted—and it wasn’t bad for Honduras).

Our children were now teachers, professors, ministers, engineers, mothers and many other notable professions. I was told that Daniel graduated number one in a high school of over 5000 students. Many told me that he was the smartest man they had ever met. And their stories moved you to tears. Luis said that when CRF showed up in his life, it was not a rain of blessings but a full storm of blessings. Junior said that CRF was always there when he had nothing else. These children grew up well.

Larry Wu said they should pay for the meal instead of me since they were now so successful. But I paid and was glad to do so. What a blessing!

It was ironic, just as our group was walking out; some gang members were walking in. What juxtaposition! Makes me want to preach.

I was a little upset that not one of the children had become a doctor yet. I could use more help with these spots. But in reality, I get to try a new medicine in two days. Maybe it will work. I’m a bit tired. And we start at 5 in the morning here. I’m praying that I will wake up spotless tomorrow.