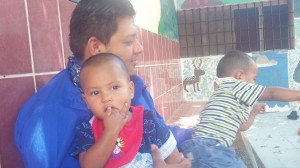 Wow, morning comes early in Honduras. Is there a 5 a.m. in North America?

Well, we started our early trip to Catacamas. Being a little concerned about the trip, I asked how long it would take us to get there. Larry Wu responded that it would take three hours. And then he said, “What can go wrong in three hours?”

I asked Larry if he had ever seen “Gilligan’s Island.”

Our crew of Carlos Carbajal, Larry Wu, Esteban Valle, and his friend Christian made it there in a little over three hours without a single shipwreck. We were greeted with applause and thunderous singing as we entered the Villa Verde church and saw hundreds of CRF children filling the pews.

It wasn’t long before Alex started preaching. And it was quite a sermon too. He preached from Isaiah 58. I wondered why he was preaching. And then I got it. Alex was a CRF child sponsored for over 12 years and now is the preacher of this church. It was a powerful sermon until his audience briefly left him as one kid carried in a piñata. We took care of that deal later. I think some of our children there should go for the major leagues the way they swing a bat.

But it is hard to get the grasp of CRF in Catacamas without seeing it through the eyes of Saulo Mondragon. In fact it is hard to even imagine CRF or the city of Catacamas without thinking of the incredible care for children and the love of the lost that the whole Mondragon family has extended for over three decades. But now Saulo is at the wheel and keeping CRF moving in this city. Saulo has extreme enthusiasm for God and CRF. And he can weave a story like nobody else. He tells stories of changed lives and restored hope that takes place through CRF and its orphanage called appropriately—“New Hope.”

At the church building, Saulo brought to me a young mother and her newborn child. This mom couldn’t stop crying for joy because of the assistance she had received from CRF. It was the difference in her life. And she wanted to make sure every one knew about it. And then Saulo introduced me to a special guest, Celeste Melendes. Celeste is very special in our family because Barbie’s mother, Eula Perkins, sponsors Celeste and has for years. Celeste was beautiful, thankful and a joy to be around.

Oh I forgot that the two heads of the best private secondary school in town showed up at the ceremony. They asked me to sign a paper stating that all of our CRF children could go to their school for a hugely discounted price. I couldn’t see anything wrong with that!

When I got to New Hope, Saulo had even more stories for me. He introduced me to Freddie Lopez. Freddie is an executive of one of the largest and most successful corporations in town. But he was there to say that he was a CRF child for over a decade, and he was thankful for it. He said that he wanted me to understand that the greatest benefit of CRF was not the money that came from the sponsor. He appreciated the financial support, but there was something much greater for him than the money. He said what made the difference in his life was that there was someone out there, a sponsor, who believed in him and invested in him. He told me this is what made him have enough confidence to make it in life. Freddie not only is a great businessman but has also earned a Masters degree in economics. Freddie has paid back the support he received from CRF over and over again as he has invested in other children.

Then there were the twins. Saulo was very proud of them. They are very young—not quite toddlers. He was hoping that I would get them sponsors. They were beautiful little boys named Stephen and Antonio. Saulo told me the sad day when their mother came to him begging him to take her children. Of course, Saulo wanted to keep the kids with their mother. But after checking on them, he found them living on a porch behind a house. The twins were eating dirt and worse as their food. She had no way to take care of her children. Today, there is new hope at New Hope. The children are happy and healthy. Surely someone will sponsor two children this cute.

And then there was the beautiful girl, Sindy, whom I met at the church building and later saw again at New Hope. She looked like the happiest and most blessed person on earth. She had just graduated from high school. For all the help she had received, she awarded her diploma to CRF and the church. And now she was the first of our CRF children to be accepted to the prestigious university there. If she can get someone to give her a scholarship, she will go there too. But it wasn’t an easy road getting to this point. Her father abandoned her. Her mom was full of substance abuse. And one day Sindy found herself outside the gate of New Hope hoping to get inside. And with the Mondragons, she found a life—until one day a family member came back to try to take her away. She was told that she needed to be in a cultic group that tattooed “666” on their upper arm. Saulo went to court and saved her. She now is in the custody of CRF. But she has always been in the arms of God. With another break, I think Sindy is going to be a world changer. The possibilities are grand when a child is given some care and a lot of love.

And then I had a dinner of dinners served with watermelon juice. Marisol is Saulo’s wife. And she can cook and a lot of it too. She fixed me a delicacy that is only served in this place. She is a gourmet cook. It was scrumptious. But Larry Wu made me promise to never ask what I just ate. This scares me a little.

Catacamas tried to make me feel important. It’s always nice when people treat you better than you deserve (I think we call that grace). When I arrived at Catacamas, I was met by a television reporter for an interview. It was nice to tell the area what CRF was all about. Then the mayor came to see me with a delegation at New Hope. He thanked me for all the good work that comes from CRF. Then he gave us land to build five houses for the poor on it. Saulo told me to ask for more. So I did. I asked for ten acres more so we could expand our work in helping children. He said, “Yes!” I’m going to get it in writing. Then he said something the reporter had mentioned in his interview. It had to do with two presidents being in town. Then I figured it out. He was talking about me. And he was talking about the other President whom he had just left to come over and thank me. Yes, it actually was the President of Honduras. I’m glad the mayor talked to him first.

Catacamas is an unique CRF work. In Catacamas, CRF has not only changed the lives of children but also the city itself. Saulo drove me around the city and showed me 18 churches his dad and CRF had planted. He talked of short-term mission trips where Americans had come to not only change this city but also to be changed by this city. There is even a section of Catacamas called “CRF City.” But ultimately the work here is known by the entire region as a place of refuge and help. It’s exactly what Alex preached about when he read Isaiah 58:6-8. Alex and Saulo left me with a beautiful certificate of honor. And it had this very passage on it.

6 “Is not this the kind of fasting I have chosen:  to loose the chains of injustice and untie the cords of the yoke,  to set the oppressed free and break every yoke?  7 Is it not to share your food with the hungry and to provide the poor wanderer with shelter—  when you see the naked, to clothe them, and not to turn away from your own flesh and blood?  8 Then your light will break forth like the dawn, and your healing will quickly appear;  then your righteousness will go before you, and the glory of the LORD will be your rear guard.

One Response to Cruising to Catacamas