Up on the Roof–What a Difference a Year Makes 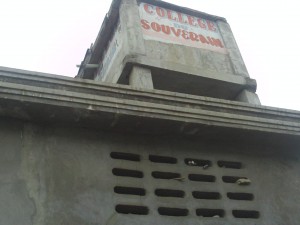 Hundreds and hundreds of children were running around screaming in a tiny space. We were taking their pictures. It was hot. It was very hot. It was Haiti. We were getting information from each of these children because they had hopes of being sponsored so they could have a better life.

I know how many more children we will sponsor in a year. And I could see how many there were. Too put it bluntly—it was overwhelming. Parents and guardians were standing in line dreaming that their child would be picked to receive assistance. I knew that so many of them would be disappointed. And then there were the children who came alone who didn’t seem to have anyone who would plead their case. And I just wish we could help everyone.

My friend, Eric, and I had to retreat to the roof of the Sovereign School in Cap Hatien just to breath and get some kind of grasp on the reality of the situation. It was his first time here. I started showing him around from the rooftop to get a little different point of view. As we looked across the way, I showed him our new building which more than doubled our space. It added not only classrooms; but also a dining hall, kitchen and even a church building. You could barely see our big, new green generator. Yes, we now have electricity in all of our buildings. Then there was that great big white tank. Yes, we were cooking with gas. We walked over and looked at the humongous black tanks on our roof. Yes, they contained clean, purified water. No more cholera at this place. As we gazed across to our new building, we could see a brand new well producing much more water, and it was even plumbed to produce running water to the new kitchen and flushing toilets. And on the roof were three of our guys from Ole Miss putting in another water purifier. Yes, we are going to have even more clean water. Then we looked in front of the building. I remembered the last time I stood here. Water was flooding down the street, and I knew it would engulf our new building in the future. But now there was a concrete drainage system diverting the water so it wouldn’t damage our facilities. What a difference a year makes.

So I went back down and looked at a list that Casey Coston was working on. Casey loves helping children. He was trying to get as many children helped in as short a time as humanly possible while still giving each one of them some love. I looked at his list and realized that we were now sponsoring probably twice as many children as we were a year ago. What a difference a year makes.

Then Casey showed me a little kid with his mom. And the little child looked vaguely familiar. A year ago the mother brought this little child to us hoping for help. We gave her some medicine and a prayer. We introduced her to some people at the church. The child was so sick that I never really expected to see the child alive again. But there was mom again. And she had a healthy kid. They both had smiles, and she was now even a member of the church there. What a difference a year makes.
I think that sometimes you are too close to the action to see that things are changing. It is true in Haiti. It is probably true everywhere for all kinds of different things. Maybe you need to go up on the rooftop and see how things truly are. If you get high enough maybe you will see God’s perspective. Things are changing. Things are better. There’s still hope. What a difference a year can make!