Pictures in a Briefcase–How I Got Started in Haiti 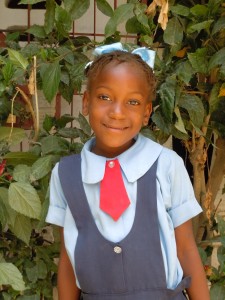 The first child in poverty that I ever helped was in Haiti. It wasn’t through CRF but through a man who sat on an airplane. Before boarding my flight, I had noticed a rather unusual man in the airport. He looked afraid to fly, fidgety, and the kind of guy who might enter all of my personal space on the flight. I hate to admit it but I was hoping that he wouldn’t sit beside me. Of course, he did. I didn’t know where he was from but knew it wasn’t the U.S. He just couldn’t speak English very well. His name was Bethonne. When I didn’t understand what he was talking about, he opened up his briefcase and sat it in my lap. It was full of photographs of little orphans in Haiti who had no help.

The heartache of the pictures and the stories that went with them translated well even though I didn’t speak Creole. Bethonne had my money, my heart, and my future pledge to help orphans in Haiti before I got off the plane. I supported Bethonne’s ministry for a short time until I learned that he wasn’t getting the money I was sending. Because of corruption in the government, somehow his funds kept getting intercepted. I was trying so hard, but things weren’t working out. I decided to try another route with a different organization. This time the money got there but not much of it. I just had to find a way to help orphans. And that’s when Barbie found Christian Relief Fund (although it was called something different back then). CRF really got the money there and over 90% of it got to the child. I wanted to help. But I needed help to help. And I finally found my help.

As I stood over a crowd of hundreds and hundreds of destitute children in Haiti today, I thought of that commitment that I had made decades ago. Even though the money never got to Bethonne, I think he would have been pleased. These children were more than photographs in a briefcase. They were breathing, singing, hugging, eating, and learning at a great school that we sponsor. I couldn’t believe how healthy some of them looked when they appeared so sickly and malnourished such a short time ago.

I enjoyed observing these children through the eyes of my good friend Eric. He supports and sponsors many of these very children. Not only does he personally support them, but he also has fundraisers and encourages others to do so. And now I loved looking at him look face to face with the very children he was saving. Not too long ago these children were pictures that I had set out before him. With his big heart, Eric responded to the stories. But there still is a difference when you get to see them and touch them.

Some other organizations won’t let you meet your sponsored child. I’m sure they have good reasons. But at CRF we want you to meet your child if you can make the opportunity. And there is nothing else like it. One of my other great friends told me how much he trusted me and how much he believed in the integrity of CRF. But he said that there was always that little skepticism in the back of his head that wondered if it was all true. But when he went to Africa and saw the children, the already committed supporter became an even greater advocate than ever before. You know what I mean, don’t you? You can believe without seeing. The Bible calls that faith. But even with faith in God, we still long for the day when we will see Him. And it is kind of like that with these children. It is nice when a believer can see.

Yes, these kids are real in Haiti. We worked hard today to teach them, get them clean water, stop some pollution that would be hurting them, and sign up some new kids that need a lot of help. We will take pictures of hundreds of more kids, and I will run around the country with their pictures in my briefcase. I guess it has come full circle, hasn’t it? Thanks Bethonne. Were you an angel?