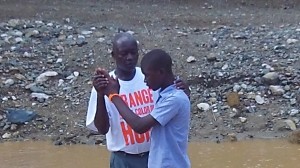 Larry Wu and I get to talk a lot about bad roads. I still don’t know where I’m going to cast my vote for the worst roads, Larry. It may go to Uganda. But if I had to cast my vote today, I might just give the honor to Haiti. It takes about 4 hours to go 40 miles from Cap Hatien to Benjamin. Why? Bad roads, of course. Now Haiti has the traditional bad road caused by huge potholes—kind of like big versions of the way I remember the freeways in Philadelphia. No, they are really gigantic holes, and you never go far before you hit another one. And then there are huge boulders in the middle of the road to hit when you are not in a pothole. But there’s the additional thing my friend and guide, James Massie, calls the sideways cornstalk. It is kind of like going over a cattle crossing or deer guard for what seems like hours. The constant vibration makes you go crazy. But as I traveled down these roads, I kept hearing about one thing—“the river.”

To get to Benjamin, you have to cross a river in your truck. And if the river is too deep, your truck just floats downstream. As a result, you never really know if you will get to Benjamin. You just go to the river and guess if you can make it across. Well, we did navigate the river and made it to Benjamin. But when we got there, we had a flood that made us wonder if we would ever be able to leave Benjamin. We just didn’t know if we could cross the river going back to Cap Hatien.

We had a great day signing up children who needed sponsorship from CRF. If you want a cute kid who has been orphaned and needs a lot of help—this is one great place to sponsor a kid. You just don’t find many needier kids who could be helped in a holistic ministry like this one.

We also worked on our water project. Their previous well had gone dry. And we have now drilled two more dry wells and are currently digging another one. Pray for water.

After dry holes and lots of pictures, Alfred Princilma—the CRF director in Benjamin, instructed us to go to the river. I wondered if after all the rain, he was telling us we better get across the river or we were going to be stuck in Benjamin for the long haul. But that wasn’t it at all. Everyone started walking to the river—not just from the orphanage but the whole community started heading to the river. Along the way, I heard that there was going to be a baptism. I couldn’t wait to see one of our CRF children baptized.

Alfred walked down into “the river.” And a young man walked over to him to get baptized. And they were actually singing “Shall We Gather at the River” in Creole. Then I noticed Alfred’s shirt. He was wearing the new CRF shirt. If you haven’t seen our new shirt, it says—“Orange is the Color of Hope.” I love the shirt. It just seemed to fit the moment so well. After he was baptized, the boy made his way out of the water with a smile that said he had a new life and lots of hope.

And then another boy came. And another. And another. Then girls came too. Pretty soon we were in double digits on the baptisms. Our children there just kept on coming.

Then the people on the banks of the river broke into another song. I knew the tune but didn’t recognize it immediately because again it was in Creole. Then of course, I got it. It was “Oh, Why Not Tonight?” The song got me. A tear rolled down my cheek. To be honest, it wasn’t for the kid being immersed. It was for me. Decades ago that’s the song they sang when I was baptized. Now it’s an old song. People don’t sing it anymore—except in Haiti.

Somehow the flow of the river had lost its ominous statement of “no crossing” and had turned into a place of “come on in–the water’s fine.” New beginnings were all around me. Twenty of our young people walked into the river.

By the time we had to cross to go to the other side, everything was safe. Yes, I mean that too.

One Response to Crossing the River