I’m Going to Your House Today 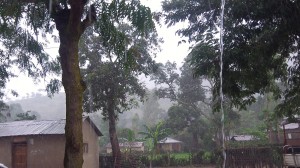 Casey has been quoting Isaiah 42:16 over and over again to all of us on the trip. “I will lead the blind by ways they have not known, along unfamiliar paths I will guide them: I will turn the darkness into light before them and make the rough places smooth. These are things I will do; I will not forsake them.”

Certainly the Lord has been leading us down unfamiliar places and giving us light along the way. I’m still waiting on the rough places to get smoother. Rough places can be more than the road I have learned. Life can be rough when you live in poverty in Haiti. Where we are staying in Benjamin, there is no pure water. That’s rough. It means you are frequently sick. Food is not in abundance. It is rough when you are hungry. Too many children simply don’t get an education. Those children don’t realize how rough that is going to make their future. And the places where they live are a new dimension of rough when you come from America.

Let me tell you what I have learned about hospitality on my last few trips into poverty-ridden places. When I think of hospitality, I always think of inviting people into my world. And that is being hospitable. When I go to a poor place, I love to give gifts. And I love to take them places where they might not normally get to go. What a thrill it is to take them to a nice restaurant where they would never get to go otherwise. But I have found that is not the kind of hospitality that they like best.

No, people most want me to come into their world—not vice versa. One of the biggest complaints that I have received is that Americans won’t come to our houses or eat our food. When hospitality is granted to us, many times we refuse. Why? It appears as if their abodes and food simply aren’t good enough. And most of us wouldn’t think that we are not being hospitable by refusing someone else’s hospitality.

And so in Benjamin, Alfred Princilma—our CRF director, invited to his house to stay. Yes, he invited about 20 of us to stay with him. Although it is a great house by Benjamin standards, it isn’t what you see in America. Big spiders live there along with all kinds of other animals. No electricity. No running water. No bathrooms. Just an abundance of love. And they fed us two incredible meals cooked over wood. It was a feast. Even with twenty of us, we couldn’t eat it all. They set the table with their best utensils. They had the food arranged like we were eating at a gourmet-dining establishment. James said it reminded him of the passage in 2 Corinthians 8:2—“Out of the most severe trial, their overflowing joy and their extreme poverty welled up in rich generosity.”

Alfred and his family could not have been honored more that we were willing to visit him. We came from miles away. We stayed at his house. We ate his food. Nothing could have honored him more. All of us need to give. It doesn’t matter how much we have to give—all of us need to give. It gives us dignity. But all of us need to receive too.
Missions need to reflect the incarnational model of Jesus. He left his world, but he truly entered our world. We can’t kind of come into another’s world and then stop when it gets uncomfortable. That is not what Jesus did. He didn’t invite Zacchaeus out to a fancy diner. He said, “I’m coming to your house today.”